I am a linguistic anthropologist interested in the points of overlap between language, emotion, identity, and social power. I look at how people express emotion (linguistically), how these emotional expressions pattern along lines of cultural identity (gender, race, ethnicity, nationality, etc), and how these patterns fit into a society’s social hierarchy. My approach is to examine discourse – how people get and give messages, whether talking face-to-face, or viewing a film, or engaging with the internet – to try to understand how social structures are created and reinforced -- or opposed and transformed. So, my research interests could be stated as: Social Dialectology (or how significant segments of society actually use language); Language Ideology (or how we’re taught to evaluate how people use language and the power/status/identity consequences of those evaluations); and Mediation (or how representations of languages and their speakers are structured). Below are some brief descriptions for the various research projects that I'm involved in. My interest in anthropology - and linguistic anthropology in particular – stems from moving to live in Vienna, Austria, as a 13-year old kid. When I arrived in Vienna I spoke no language other than English, but once there I was forced to learn German from the community and Latin in the schools, and I developed a fascination for languages -- and for how people use them. I saw firsthand, for example, how ‘native Austrians’ used language style to make (then) Yugoslavian guest-workers (“Gastarbeiter”) feel their foreign-ness in Vienna. When I returned home, I suddenly saw that kids in my suburban Cleveland high school engaged in the very same sorts of identity marking, as white and black students collaborated to construct maximally separate linguistic identities. The Politics of Language in Israel/Palestine

Israel was the site of my first formal research project. I spent two years living in Haifa observing Jewish and Palestinian Israelis as they used language (talking, reading, listening to TV/ radio, etc.) to negotiate what it meant to be “Israeli.” I was particularly drawn to how Israelis used intonation (the patterned rise and fall of pitch in speech) while speaking Hebrew. In my book Words and Stones I describe how members of the two subordinate ethnic/class groups in Israel, Mizrahi Jews and Palestinian Arabs used non-standard pitch patterns (or tunes, and especially the tunes that ended phrases) to contest, or symbolically resist the dominance of mainstream ideas of ‘Israeliness’. Intonation was especially interesting because people (in Israel, as elsewhere) use it so much to express emotion.

My interest in intonation has led now to research on what linguists call “stance” and “voice quality.” Specifically, the phenomenon of “creaky voice.” All speakers tend to trail off a bit as they near the end of a phrase or utterance, and when they do so their voice begins to sound creaky. The phenomenon I’m interested in is the spread of this effect to other parts of an utterance, as you can hear in the following YouTube clip of interview speech with a well-known female sports broadcaster, Lindsay Jones. (I got this clip, by the way, from a blog post about creaky voice that has lots of other interesting examples.)

This research aims to answer questions like: ‘How do people (really) communicate to others what they feel about what they’re talking about (what linguists call “stance”). While we THINK (and are generally taught to think) that we do this with the words we choose – in fact this project argues that we’re deeply mistaken about that, relegating the significant communication to such marginalized and troublesome domains of language as intonation, prosody, creaky voice (my focus to date), etc. My colleague Mark Sicoli and I presented a paper on the phenomenon of creaky voice, which you can see here.

Stance and Gesture in Political Speech 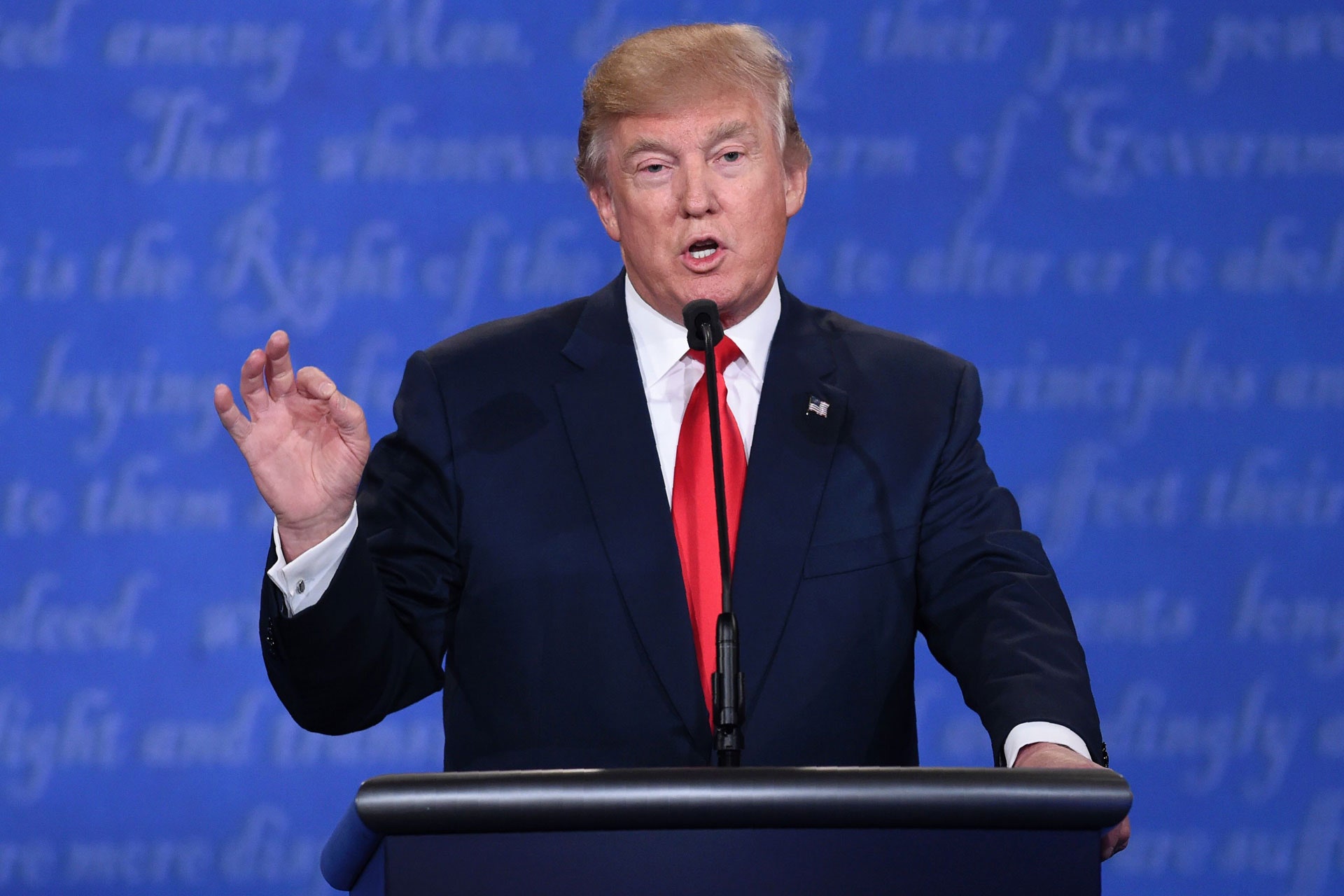 My fascination with creaky voice led me to a current research project on the gesture patterns in President Donald Trump's formal speeches. The image at left shows President Trump using a common hand gesture while speaking formally. While many politicians gesticulate with this and other hand shapes, what I find relatively unique -- and interesting -- about President Trump's gesturing is his tendency to move his hand(s) laterally, from the center of his body out toward the side. In contrast, most politicians gesture down and front, toward a presumed listener.  My analysis of this particular gesture pattern looks at its rhetorical and stylistic effects, given that lateral gestures are usually interpreted to express hesitation, uncertainty, or ambiguity. I am currently writing a book about language (i.e., character speech) in Hollywood movies. This project stems from a general interest in the relationship between how people speak, how peoples’ speech is represented (eg, in media), and how people react to the images of speech they encounter. So it’s about what we call “language ideologies.” The book looks at the culturally meaningful varieties of English that movie characters are given to speak – and what these usages come to mean as components of the films’ messages about identity.

Some pieces of this book have already been written up, and the images below link to some of this work: This summer I worked with a student to try to discover how the presentation of news about the current Coronavirus Pandemic in such news outlets as CNN and FoxNews influenced the disastrous public policy decisions that led to the rampant spread of the virus in southern and western states during the summer of 2020. I have always maintained an interest in the practical applications of linguistic anthropological research, and in the coming years I hope to return to my original interest: the role of language and identity in American schooling. A formative experience for me was spending a year at the Oneida Tribal School near Green Bay, Wisconsin, learning from the teachers, administrators, and community members about the meaning of a heritage language to children's social and cultural development and thinking about ways to use multiple languages in a modern American public school setting.

At the University of  Virginia I teach large undergraduate lecture courses in:

I also offer graduate seminars in:

2019. A Discourse-Centered Approach to Sound and Meaning in Spike Lee’s Chi-Raq. Journal of Linguistic Anthropology 29(2):231-238.

2007. (With Mark Sicoli) "Creaky Voice: Construction of Gender and Authority in American English Conversation."   Paper presented at Phonation, Voice, and Style session at the Annual Meeting of the American Anthropological Association.